This was Diana on the worst and best day of her life.

This was Diana on the worst and best day of her life.

Worst because....just look at her. On top of this physical misery, bad kids were throwing rocks at her and poking her sticks. She was in pain and her spirit was crushed and as the bad kids danced around her shouting Diana just quit. She was resigned to the sad death that seemed inevitable.

But it was also the best day: Those terrible shouting kids drew rescuer Nirva's eye. Nirva was on a road she'd never driven down in a part of town she never goes to and had stopped to check directions when she saw the dust and the children. Sometimes the gears of fate chime like the stroke of midnight and they did that day when Nirva saw something move, something gray. Nirva got of out the car, shouting herself, and left that dirty lot in with Diana.

Diana is our longest tenured mutt-mutt. She's been in our care for months and months. The things you can see that were wrong with her was just the half of it. But it was in the first hours we had her that Diana was at the vet and showed us her own self she was not resigned to die after all. Diana is a fighter.

We named her for Wonder Woman and a wonder she is, just like her foster Nirva is too, bathing Diana with such tenderness every day and helping Diana become strong.

It's been months....and months....but now Diana is strong. And she's ready. 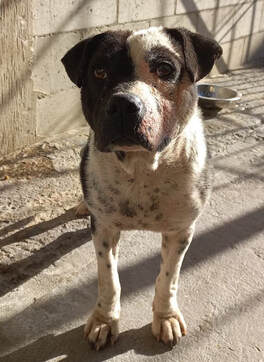 This is Diana today. Her turnaround is breathtaking. She is now ready for a new life, a completely different sort of life than the one she's known before. Diana is ready to love, and be loved, forever.

In honor of Father's Day, we celebratedDiana's strength, her bravery, and her future.

Together we are Diana's father, her mother, her life. Your support creates miracles.

Happy Father's Day to everyone - the fathers, the dog daddies, and to all us children of fathers too.

Have a beautiful day, and thank you for saving Diana.