Odyssey is not an exotic breed of hairless dog.

Odyssey is not an exotic breed of hairless dog. In this picture, she is a sick dog, with a weakened immune system and mange so bad it left her bald and wounded.

Odyssey is not a plump dog. In this picture, she is starving. But her skin is so swollen it is hides her joints and bones.

This weekend, we’ll be sharing Odyssey’s transformation. We hope you’ll follow along.

Odyssey we love you. 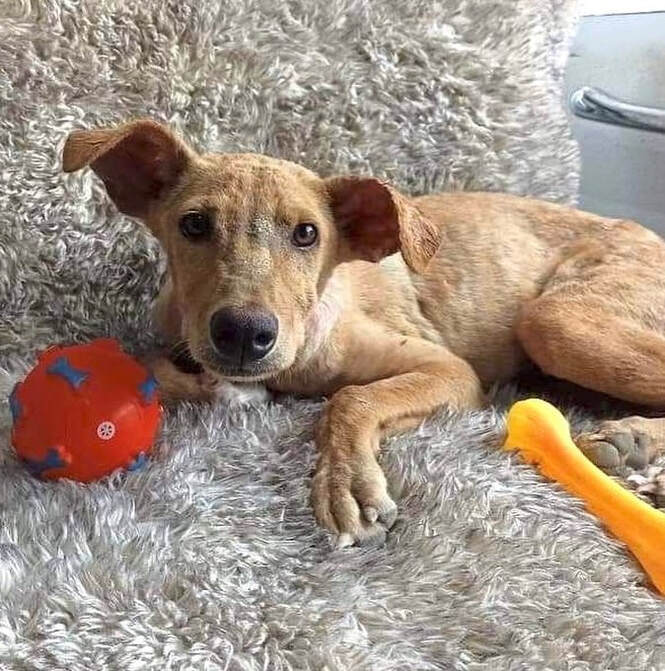 Baja California can be a particularly hard place for dogs, especially a small young dog like Odyssey, whose immune system was tanking under the ravages of heat, cold, hunger, thirst and disease. As cute as Odyssey looked all pink and wrinkly, those aesthetics were the forebearer of death.

But Isabelle saved her.

So as a survivor of incredible hardship and sickness whose light was then nurtured and returned from the brink, Odyssey’s story is not so different from that of many of the Baja SAFE dogs we’ve helped. But is it also no less remarkable.

Stay tuned for more of Odyssey’s story, and thank you for your support. 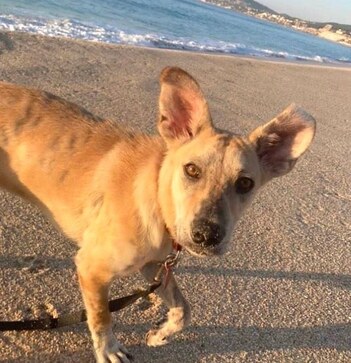 Andrea travels for both business and pleasure. When traveling to places where dogs are in need, Andrea makes a point to fly one up north with her. Andrea is a seasoned and gracious flight angel. She has helped so many dogs find their way to better lives.

Odyssey looked on the team from BAJA S.A.F.E. with a knowing, palpable gratitude as they said good-bye to her. Baja SAFE had rescued and healed Odyssey down in Los Cabos, Mexico, and the culmination of their dedication to her is to send her on to a better life in the United States. That’s when Andrea’s and Odyssey’s paths crossed.

Andrea has transported many dogs, each of them beautiful and worthy of the bright futures to which she brings them. But there is something extra special about Odyssey. It is the unbridled trust with which Odyssey looks into your eyes. Odyssey is willing to surrender to fate absolutely, because despite the cruelty of her fate initially, fate turned kind; despite the cruelty from humans she experienced initially, it is the kindness shown Odyssey that shaped Odyssey absolutely. Odyssey will offer you her heart and her soul without fear or question.

Odyssey's story here began with her looking like a newborn. Mange left her hairless and pink and so utterly vulnerable. Now Odyssey is healthy and glowing and golden and strong, yet that seemingly newborn version of herself lives on in her innocence.

Thank you Baja SAFE and Andrea. And thank you Sunny Skys Animal Rescue of Puyallup, Washington for welcoming Odyssey, and finding her the home that fuels our dreams, and realizes them.